This week was our St George's Day session (one day late), so there were songs of England, knights and dragons. We were all pleased to see Maggie back with us, albeit with her right arm in plaster. She still managed to sell the raffle tickets at the interval with some help from the customers with tearing tickets. In expectation of Mike and Maggie leaving early, Colin took up the mantle of MC for the evening. We were joined by two audience members, more of which later.

Mike mistakenly suggested that his only song to mention St George was one which he will sing next week for May Day, so he started off the session by commemorating the hundredth anniversary of the start of the Gallipoli Campaign with The Band Played Waltzing Matilda (Eric Bogle).

The notable thing about last week's session was that we were joined by two newcomers, Sian and Rob. They claimed to have enjoyed the experience, so let's hope they return to the Dragon Folk Club very soon.

I didn't really detect any theme this week although there were some pairs of songs which somehow went together.

Colin was MC and asked Mike to start off the proceedings, which he did with The Hunting Priest (Tally Ho The Hounds or Doctor Mack). Derek was next with Queen Eleanor's Confession (Roud 74, Child 156).

Remembering Ray... and other stories

When I arrived at The New Inn last Friday I saw a large table of people being served with food where we usually have our session. I thought for a moment we had been let down again as at our previous venue. I headed back to the car, then I realised there were familiar cars in the car park. Should I put my guitar in the car and go to investigate, or should I just go and investigate anyway? I went to investigate, guitar case in hand. Sure enough, I found a group of our regulars in the other bar with drinks. No one immediately explained, so I just got myself a pint and took a seat. 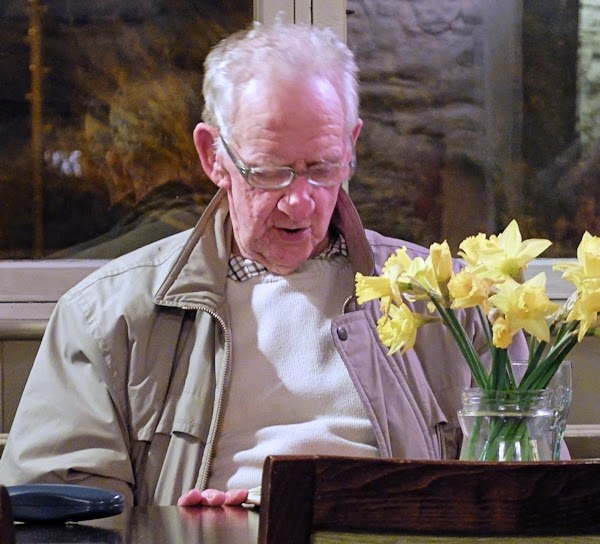 This article is one of a series on regulars at the club.

Roger first attended the club around fifteen or twenty years ago but he recently returned after a long break.

His musical career began in 1942 when he joined the cub scout movement, singing around campfires. In Wales he was a member of a boys' choir and sang rugby songs on tour.

Roger's more recent musical background is amateur musical theatre and that's where he is happiest. He played with Avon Light opera in Salad Days, Oklahoma and White Horse Inn, which his wife, Christine, produced at the Redgrave Theatre. He tours with a "concert party", entertaining at retirement homes.

Roger is practicing the harmonica, piano, electronic keyboard. He likes to attend the Sidmouth Folk Festival.

We were a bit thin on the ground this week. Not least because, as we heard last week, Maggie has been in the wars, and I heard that Lesley may also be suffering (unconfirmed report). Get well soon ladies and come back to us. Friday was Good Friday, so there were Easter-themed songs about though we didn't all step up to the plate in that respect.

Colin was MC and he asked Derek to start us off. Derek started as he meant to go on, taking us almost on a stations of the cross tour of Easter, his first being A Week Before Easter (Roud 154). He followed that up with Maundy Thursday in the shape of Judas (Child 23), then on to Good Friday with Tomorrow Shall Be My Dancing Day.

Finally on this strand Easter Day, or rather the Easter Rising, was represented by The Women of Cumann na mBan, (The Soldiers of Cumann na mBan). Derek picked this as being the most difficult to spell in the log book for MC, Colin, who had headed him off at the pass earlier by singing his original choice, The Foggy Dew (Canon Charles O’Neill).

Email ThisBlogThis!Share to TwitterShare to FacebookShare to Pinterest
Labels: A Week Before Easter, Jesus Christ, Judas, Scarborough fair, Tequila Sunset, The Foggy Dew, The Mary Ellen Carter, The Pace Egging Song, Were You There When They Crucified My Lord, White Trash
Newer Posts Older Posts Home
Subscribe to: Posts (Atom)