Seek and ye shall find

OK, so that went well didn't it. With Colin away last week I did a bit of extra publicity and... Geoff and Simon ended up serenading each other for the evening. Seriously, we had a pretty good do, with plenty of singing and a bit of chat thrown in.

Since Geoff arrived just before Simon he was called to sing first. He sang Good Hearted Woman (Waylon Jennings, Willie Nelson) which he said was written during a card game, inspired by Tina Turner and the abuse she suffered while married to Ike.

Both Geoff and Simon sang songs which had been recorded by The Seekers to mark the death of original lead singer Judith Durham. Geoff sang Bush girl (words by Henry Lawson) and Simon sang Morningtown ride (Malvina Reynolds).

There was a brief conversation about songs which while good aren't very nice, usually it seems in terms of misogyny. Note that we don't avoid songs which may cause offence, particularly when those songs are historical artefacts telling of past attitudes. There followed a few of these, possibly including:

(Number of people present - 2 of whom 2 performed)

Email ThisBlogThis!Share to TwitterShare to FacebookShare to Pinterest
Labels: As I Roved Out, Bush girl, Cousin Jack, Good Hearted Woman, Laird Of The Dainty Dounby, Morningtown Ride, No Sir No, Step It Out Mary, The L&N don't stop here anymore 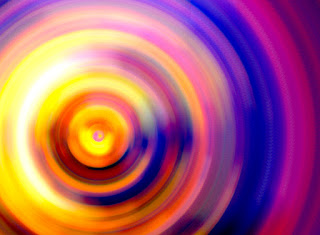 We were back to a skeleton staff at the Dragon Folk Club last Friday, but we had a good evening nevertheless. This week we will be one core man down - Colin, our usual MC - so all being well Simon will be MCing. Please make an effort to come along and sing, play, tell a story or even just listen.

Back to last week, MC Colin started us off with Stung Right with words by Joe Hill. The tune (written by by Winfield S Weeden) comes from an evangelical hymn called Sunlight, sunlight (words by Judson W Van De Venter) and was later used by Ewan MacColl for Browned off. Stung right was a new one for my database, but Colin had sung here it before.

Colin didn't remember Simon having previously sung Mike Harding's A small high window though he had done so.

Simon finished the evening slightly early since we were the only people in the pub and the staff wanted to close. It's always good to close with a joiner-inner. In this case The Galway Shawl (roud 2737).

Raised on songs and stories 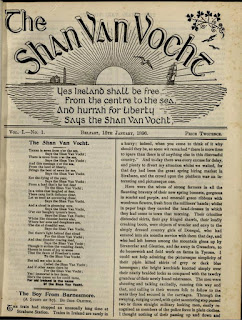 Last week's Dragon Folk Club session was a refreshing change. We thought it was going to be a game of "to me to you" with our version of the Chuckle Brothers the only performers present, but no we were blessed with the only slightly late arrival of Steve C and Jane. Steve would join us with some singing and Jane would give us some of her excellent stories.

Colin started the evening with Ted Edwards' Coal hole cavalry which certainly got us warmed up in the vocal department. Simon brought to mind the very recent death of Bernard Cribbins with Right said Fred, written by Ted Dicks and Myles Rudge.

Steve C gave us The Blarney roses (roud 6329) and Jane's first story, which she gave the title "The Violinist" introduced us to the reaction of an elderly violinist to a new preacher who condemned "the devil's music" and what that led to years later.

As some of you know, I keep a database of songs which have been sung at Dragon Folk Club sessions. It goes back a few years now but isn't complete even over that time. This week there were four songs which I had to add to the list.

1) I remember The Shan Van Vocht (roud V33975) being sung at the club before, but it hadn't previously found it's way into the database. On this occasion it was sung by Colin. The title seems to be a phonetic rendering of the Gaelic "An tSean bhean Bhocht" - "The Poor Old Woman". The song dates from the Irish rebellion of 1798. It gained notoriety in nineteenth century Ireland as a seditious text. In the 1890s it was adopted as the title of a popular historical novel and of a nationalist magazine, both of which, in the face of the growing sectarian division over Irish Home rule, sought to vindicate the republican legacy of the United Irishmen.

Colin asked Simon to finish the evening which he did by singing Stan Rogers' Northwest passage.

(Number of people present - 4 of whom 4 performed) 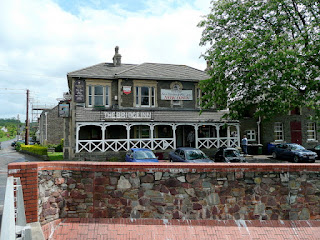 We can just about cog along with three singers present and that's what we had last week. Really we need some more of you to come and swell our numbers. At least one of last week's singers won't be there this Friday so it's all the more important for you make an effort. Three just about works, five is OK, more is much better.

Colin kicked us off with Murray Lewis' Forgotten the words. Simon continued with Geordie (roud 90, child 209) and Geoff completed the first rotation with The little beggarman (roud 900).

I won't go through the whole of the evening, you can almost do that by using the "a selection" link below. There were just two songs, both sung by Simon, for which there isn't a video linkable there. The first deserves a bit of a preamble.

Geoff noted that the Doom Bar (beer from Cornwall) wasn't at its best this week. Simon recalled a recent occasion when it had been worse. Conversation continued for a while along the lines of how well beer is kept by different pubs, where you can get a cheap, well kept pint, and how some pubs don't have enough turnover of beer for particular ales which don't keep well. This conversation led Colin to sing A pub with no beer. Note that on this blog Colin's song has previously been credited to Slim Dusty who did indeed record it, but in fact it was Gordon Parsons who wrote it, adapted from a poem by Dan Sheahan (A pub without beer).

Simon immediately referred to a song written by our old friend Richard Gillion about him and the fact that he drinks Doom Bar at the club. Simon had never sung the song and didn't think he could. Later however he looked up the words which refer not only to Simon, but also to a number of songs he sings and the fact that he used to bring a bodhrán to sessions. The song in question is The dodgy Doombar and he managed to squeeze out a rendition. Don't worry, the beer is usually better than this at The Bridge Inn.

The other song with no easily link-able video, again sung by Simon, is The Lincolnshire song written by John Sykes and sung here by his daughter Miranda. The video is there on YouTube alright, but is part of a much longer performance. By the wonders of YouTube we can link an index into the video here, but not in the playlist.

It also fell to Simon to finish off the evening, which he did in his customary way with When all men sing (Keith Scowcroft, Derek Gifford). It's always guaranteed to get people singing, even when there's only three, and even when, as this time, Simon's throat demands that he turn down the volume from 11 to maybe 7 or 8. Perhaps the plaster wasn't quite shaken from the wall this time - our hosts Helen and Mark might be grateful for that.

Email ThisBlogThis!Share to TwitterShare to FacebookShare to Pinterest
Labels: A pub with no beer, Forgotten the words, The dodgy Doombar, The Lincolnshire Song, When all men sing

Last week's Dragon Folk Club session was better populated than the previous one, but still just three singers turned up. It might have been more if it weren't for a COVID-19 infection... all sorted now.

Colin started the evening with the reply to Pat Cooksey's The Sick Note. I'm afraid I haven't managed to find the reply.

There weren't many songs sung through the evening, instead there was plenty of chat on various subjects including health problems, moving house and house surveys.

The singing continued with:

Geoff finished off the evening with The Comical Genious.

Colin was ploughing a lonely furrow at last week's Dragon Folk Club session. While we may ask "If a tree falls in a forest and no one is around to hear it, does it make a sound?" we should probably trust that Colin did indeed sing some songs and he says he may sing some of the same ones this Friday when he hopes there will be someone to hear them.

In fact he did pretty well to sing a total of eleven songs before calling it a night - and presumably draining his glass. I clearly wasn't there, so I may have incorrectly guessed some of the songs he sang, but here goes nothing:

(Number of people present - 1 of whom 1 performed)

Sorry but I won't be able to write a proper report of tonight's Dragon Folk Club session, but here's a very quick summary. It was good to see Steve C who had not visited us for a while. There was no official theme but Simon and Steve between them worked up a minor one on the Great Lakes with songs from the pens of Gordon Lightfoot and Stan Rogers.

During the evening we got through 27 songs, that's nine each, and we still had time for some chat.

Why not join us next Friday? See you there.